Posted by jill on Tuesday, 11 April 2017 in Uncategorized

Bidding for Success: Maintaining and Repairing Places of Worship 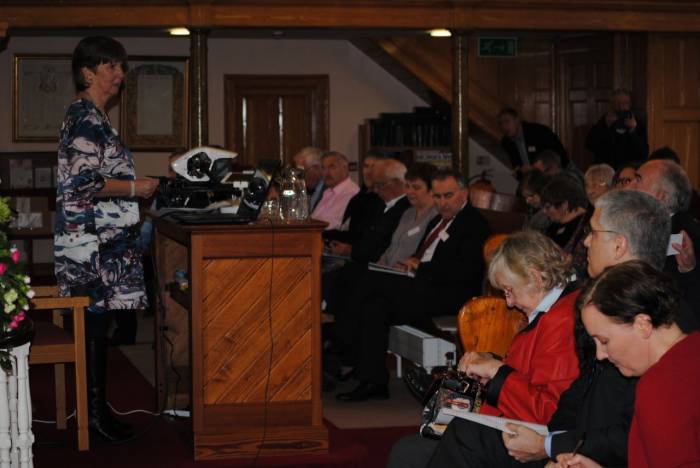 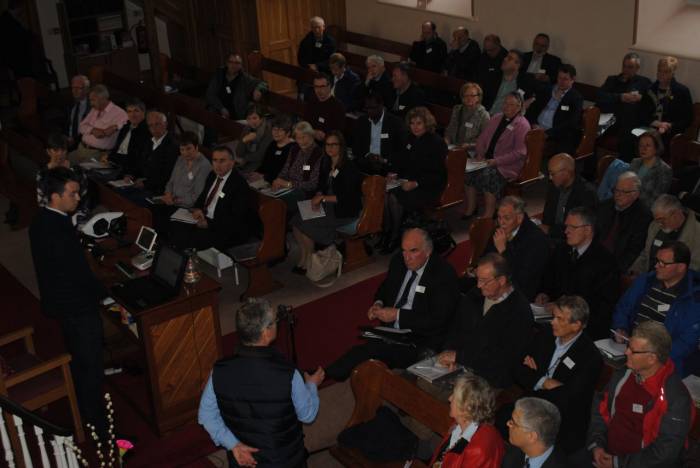 The Ulster Historic Churches Trust (UHCT), in partnership with the National Churches Trust (NCT) and with support from the Heritage Lottery Fund (HLF), organised a seminar to launch the UHCT Pilot Maintenance Project and the NCT Partnership Grant Scheme. There were also several key speakers covering various aspects of maintenance and giving advice on available funding sources. The event was held at Gracehill Moravian Church on Friday 31st March 2017 and was attended by over 80 people all of whom were concerned with various aspects of church maintenance.

Following much appreciated refreshments supplied by the church, the programme was to commence with a demonstration drone flight but due to the very inclement weather this was postponed in the hope that the rain would cease at some point during the morning. The Reverend Sarah Groves welcomed everyone to Gracehill and then Jennifer Stutt, Chair of UHCT, opened the proceedings. She thanked the speakers Michael Murray (NCT); Chris McCollum (Chris McCollum Building Conservation); Jason (Drone View NI); Caroline Maguire (Heritage Advice and Regulation, Department for Communites); and Nigel Mills (NCT) for participating in the seminar and went on to explain the programme for the morning. The afternoon session was hosted by Una Duffy (Development Manager, HLF). Michael Murray from NCT announced the partnership between UHCT and NCT and outlined how this partnership could benefit churches in Northern Ireland.

Jason displayed the drone which is used for surveying buildings. He explained how it operated and what regulations govern flight. Presentation of photographs and video helped visualise the survey for the audience who responded with numerous questions for both Jason and Chris.

Jennifer officially launched the UHCT Maintenance Scheme Pilot. The aim of the project is to show how beneficial the information gathered from a drone flight could be in assessing maintenance problems and how it could add significantly to the information gathered from a traditional ground based survey. The pilot study of eight churches, two from each denomination plus the host church, Gracehill, would be undertaken this year, thanks to a grant of £10,000 funded by NCT. Representatives of the selected churches were among those in attendance.

The scheme will involve a drone survey of each church at no cost to the church. This will be followed by a report, which will include stills from the survey. There will be one of three outcomes:

2. Minor works required eg, slipped slates to be replaced, gutters unblocked etc. For this category a grant of up to £500 (including VAT) will be offered to rectify the problem indicated by the survey.

3. The final category will indicate that more major work is required. For churches, which fall into this category, a more detailed report will be provided and advice as to where to apply for funding will be given.

The UHCT is particularly pleased to be working with Chris McCollum on this. Chris is the Diocesan Surveyor for the Church of Ireland Dioceses of Down and Connor and Dromore and for UHCT, will be overseeing the project and completing the evaluation at the end of the pilot scheme.

Chris gave a very illuminating talk on how drones could be used to access areas not normally accessible above roof level, providing unlimited images from various angles and all at a significant cost saving compared to the hire of a crane.

Caroline Maguire used her talk to emphasise the importance of regular maintenance pointing out pertinent elements, materials and details which should be inspected regularly and what problems to look for in each case.

One of the main reasons for the seminar was the subject of the next speaker. Nigel Mills from NCT used the opportunity to launch the Partnership Grants Scheme in Northern Ireland. For this particular grant, NCT is working in partnership with UHCT and the aim is to provide grants towards smaller urgent repair projects costing under £100,000. Grants are generally in the region of between £2,500 and £10,000. More information on this grant and the other NCT grants can be found on the their website ( http://www.nationalchurchestrust.org/our-grants).  Nigel went on to explain how this latest grant complimented the other grants available.    These include:

These are awards of between £5,000 and £40,000 towards the cost of urgent and essential structural repair projects. Projects must have an estimated cost of    at least £100,000.

Awards of between £3,000 and £10,000 to support churches developing schemes of repair or maintenance.

This programme was launched late 2016 to offer proactive repair grants to encourage listed churches to act on small urgent repairs detailed in their                  quinquennial inspection reports.

At this point the weather had significantly improved and Jason was able to demonstrate the drone in action. Everyone took their places on the other side of the road and watched Jason manoeuvre the drone over the roof of the church.

The afternoon session was hosted by HLF. Una Duffy presented an overview of the grants presently available to listed churches including the Grants for Places of Worship which was to close later this year. She encouraged churches to look at the other grants on offer - Our Heritage and Heritage Grants - which were intended to simplify the approach for applicants, provide more flexible access to funding, give quicker decisions for smaller projects whilst streamlining the portfolio of programmes.  She went on to give clear guidance on how to produce a good application and advised interested churches to submit a project enquiry form and get advice on their project idea before applying. She also explained what HLF were looking for in an application and how they undertook their assessments. Una and her colleague, Jimmy Laverty, were on hand to answer any questions  following the close of the proceedings.

This was an extremely interesting event which launched an important and innovative pilot scheme for churches in Northern Ireland, provided valuable information on grants available for churches, re-emphasised the need for regular maintenance and how a good comprehensive survey could ensure that problems were dealt with before they became a major and expensive issue.